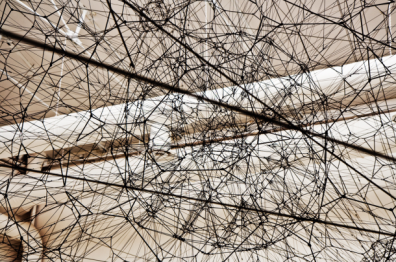 So that is Actor Network Theory.. and I’m pretty sure that is what my inside of my head looks like right about now…

Let’s break this down!

From my understanding, The Actor Network Theory or ANT was developed by philosophers Bruno Latour, Michel Callon and John Law. The theory is a family of material-semiotic tools, sensibilities and methods used to analyse the web of relations in existence in our society. It indicates that both human and non-human “actants” (actants being the preferred term as “actor” is generally used to talk about the roles of humans)  are equally important to the social network.

In relation to publics and publishing, I believe that the Actor Network Theory places humans (the authors, creators, publishers, etc) at an equal and just as important level as the technological platforms involved in publishing.

A web of relations (or a network) is also known as an assemblage. An assemblage is an assembling of elements and actants in a flat ontology, or in other words where all elements are equal.

There are many different types of human and non-human actants:

So to re-emphasise, all the above elements are equal in forming a particular assemblage. An iPad is required just as much as a reader is required to read the iPad – this is the only way a connection/bond/network and overall, assemblage can come together!

However it is also very important to note that the Actor Network Theory has received its fair share of criticism.
As per the reading by David Banks, ANT is seen to dismiss basic social factors such as race, class, gender, and post colonialism. By ignoring these basic categories of social science, ANT is incapable of challenging the power of racism, corruption, sexism and the like. The question also arises as to whether or not ANT’s vocabulary and analytical tools can challenge power structures or only describe them.
Should Actor Network Theory be called a social theory at all?